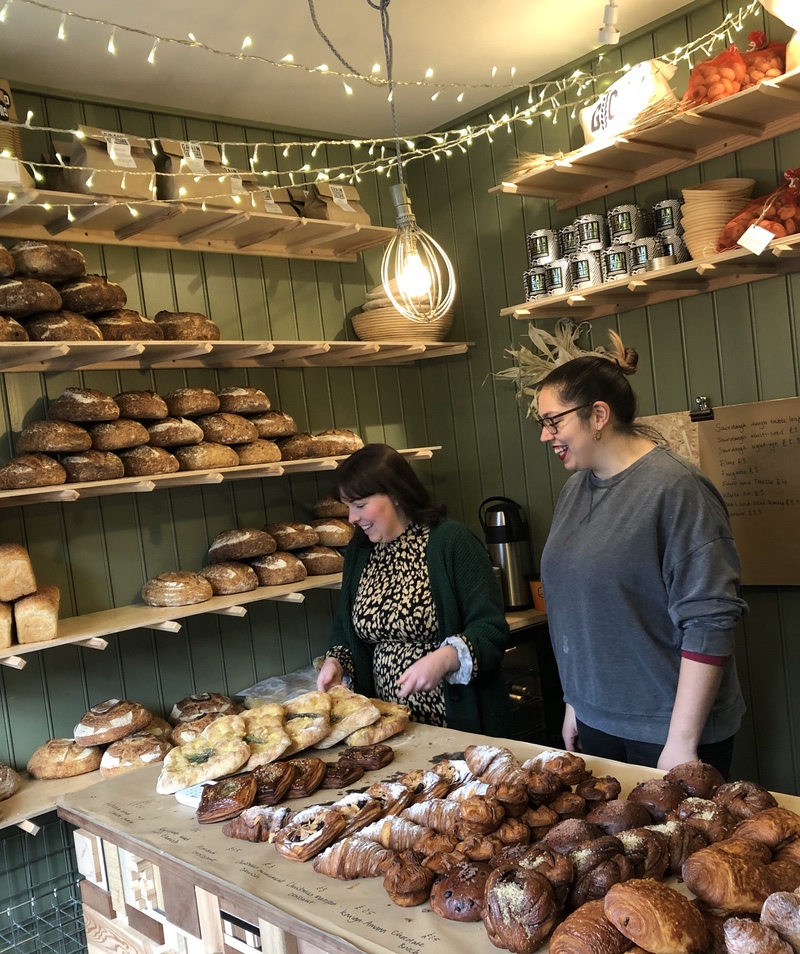 When I started the Cambridge Food Tour in Cambridge, there were no Artisan bakeries in Cambridge. A few days after my first walking tour in September in 2012, I noticed that the Old Norfolk Street Bakery had re-opened. I popped my head through the door, and I couldn’t believe my eyes.

Delicious freshly baked bread and pastries were ‘smiling’ at me. It was just after 4 pm and the primary school down the road just finished and the mothers were gathering in the bakery. They clearly all had eyed the delicious Pastel del Nate, which just had popped out of the oven. How could anybody resist these sweet, warm pastries? Needless to say, the 30 Pastels had gone within seconds. I was stunned. This was when I decided that Adelia was the golden girl and had to be featured on our food walking tours.

The first Norfolk Bakery Adelia opened was in September 2012, which was followed by her second shop on Station Road in 2017. Read the story of how I met Adelia, the owner, in the first paragraph.

Fitzbillies is the most famous bakery of Cambridge, who are the creators of the sticky Chelsea bun. They have 2 shops. The original one is in Trumpington Street and they opened their second cafe on Bridge Street in 2017. In 2018 they had the opportunity to take over Cobs Bakery and they now produce their own bread for their own use and wholesale.

Whilst living and working in Brighton, Clement saw the opportunity to open a French bakery in Cambridge. He opened Maison Clements on Hills Road, his first bakery, in 2017. Besides delicious bread, he makes fantastic French pastry too. In 2019 he took over the oldest bakery in Cambridge in Newham. He must have is their delicious Croque Monsieur!

The Cambridge Oven on Hills Road

Much to my surprise, Jolita opened The Cambridge Oven in 2018 almost next door to Maison Clements on Hills Road. Originally from Lithuania, she spent a few years training at The School of Artisan Food learning how to bake iconic British, European and International products as well as contemporary bread, sourdoughs and pastries, from some of the most respected artisan bakers in Europe. Jolita’s style of bakes, both bread and pastry, is quite different from Maison Clements so it compliments each other.

Gail’s Bakery at the Grafton Centre

The first time I came across, Gail’s Bakery was in London in March 2019. I straight away fell in love with their pastries and bread. Especially their Waste bread. They take yesterday’s unsold loaves and turn them into breadcrumbs, before making a porridge-like mixture with them. The breadcrumb porridge is then added to a fresh white sourdough dough, with the waste bread making up around a third of each new loaf. It’s then proved, shaped and baked, and at 750g, it’s larger than their other loaves. The result is a moist, tacky loaf with a scorched crust and malty flavour. I love it!

In 2015 Judith opened Stir Cafe in Chesterton Road. It is based on the Australian concept of a cafe. The owner always wanted to open a bakery, and when the shop next door became available in 2017, it was the opportunity of a lifetime. This was the start of Stir Bakery. If you don’t have time to collect your bread from the shop, then you can get your daily bread fix delivered by pushbike.

A bit further afield you can find Grain Culture. Luca started making bread in his garage in 2018 and selling his produce on the market in Ely. His excellent bakes became so popular that local shops started selling it. Local cafes and restaurants changed their suppliers and started using his roles and loaves. In 2019 Luca had the opportunity to rent a part of the flower shop, Thymes on St. Marys, in Ely. His shop, The Bake Shop, began as Saturday sales only and has now turned into selling bread daily from here.

Check out the Cambridge Travel Guide

Accommodation in Cambridge
January 14, 2020
Search
View all my blog posts