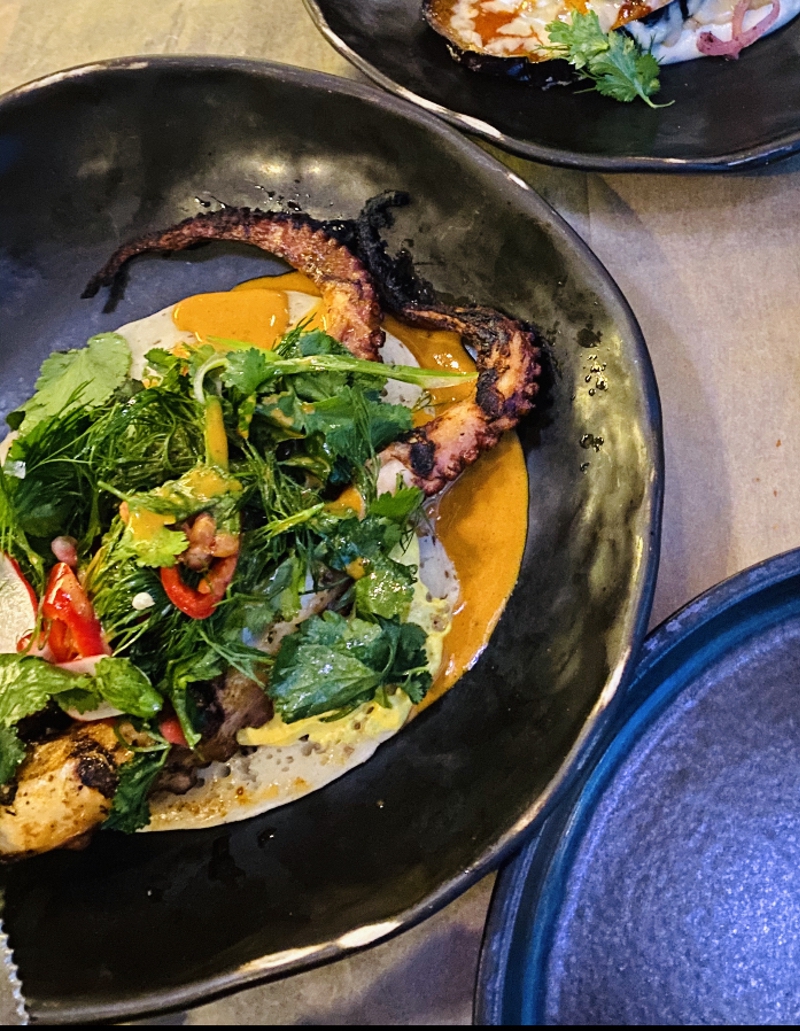 Where to eat after lockdown 2.0? Coal Office should definitely be on your list!

Just before everything closed again, I managed to squeeze in a weekend in London to spend some time with my daughter. It was a last-minute decision so finding a restaurant for the Sunday night was a challenge. Instead of dining in Islington, we managed to get a table at Coal Office, at Kings Cross. We weren’t quite sure what to expect, but one thing for sure, the decor was going to be stunning having been designed by Tom Dixon.

As soon as we walked in, we knew it was going to be a fun night out. We were one of the first guests at 5.30 pm, but the restaurant soon filled up. Looking around, I wondered what the area used to be as there were a funky pizza oven and fridges with worktops against the wall. Not something you tend to see in a restaurant. The pizza oven is not in use anymore after they have had issues with the smoke and the part of there restaurant where we were seated used to be the pastry section of the restaurant.

No one knows what happens tomorrow

It is without saying that 2020 has been quite a year! We have all learned that you have to pick the day and enjoy it. My daughter and I were undoubtedly going to enjoy every minute of our time together. Their daily changing menu reminded us of what is important in life as it said ‘No one knows what happens tomorrow’.

A melting pot of cuisines

Dining at Coal Office mirrors the unique, engaging traditions found throughout Jerusalem, the Middle East and the Mediterranean. These are three out of my four favourite cuisines on one plate! How on earth was I going to make a choice what to eat that night! The waiter was very helpful in explaining the concept. He recommended 3 small dishes, 2 large ones and a dessert. When we put our order in, his comment was “you must be hungry!”

Whilst we were sipping our welcome drink, we inspected the menu. For once we agreed on the same dishes, apart from the bigger plates, so we decided to have three instead of two. We would decide later on dessert.

For mains, we opted for the Octopus Al Lachuch, Yemeni pancake, truffle harissa sauce, pomegranate and herbs. On recommendation of our host, we decided to go for the Beef & Lamb kebab, thigurt, masabacha, aubergine, Kurdish dips and pita. We weren’t quite sure what to expect. Kebab means roasted and this one was served as two big koftas.

The food had been fantastic that evening, mind-blowing I would say. We definitely were stuffed, but the black tahini ice cream was so tempting that we couldn’t resist it. Not knowing that Coal Office would throw in a complimentary dessert! We were at the point of explosion.

The best things about Coal Office is not only the delicious food but the laid back atmosphere. From time to time we could see the chefs in the open kitchen dancing to the music!

Coal Office is a collaboration between Tom Dixon Studio and the celebrated restaurateur Chef Assaf Granit. Assaf became a mainstay of London’s culinary scene with his renowned spots The Palomar and The Barbary. Born and raised in Jerusalem, Assaf now has 11 highly-successful restaurants between London, Jerusalem, and Tel Aviv feted for his unique strand of modern Mediterranean cuisine.

Let’s hope that things will ease up soon so I can jump on the train to Kings Cross for lunch or dinner at Coal Office. I’m tempted to extend my stay to check out his other venues too.