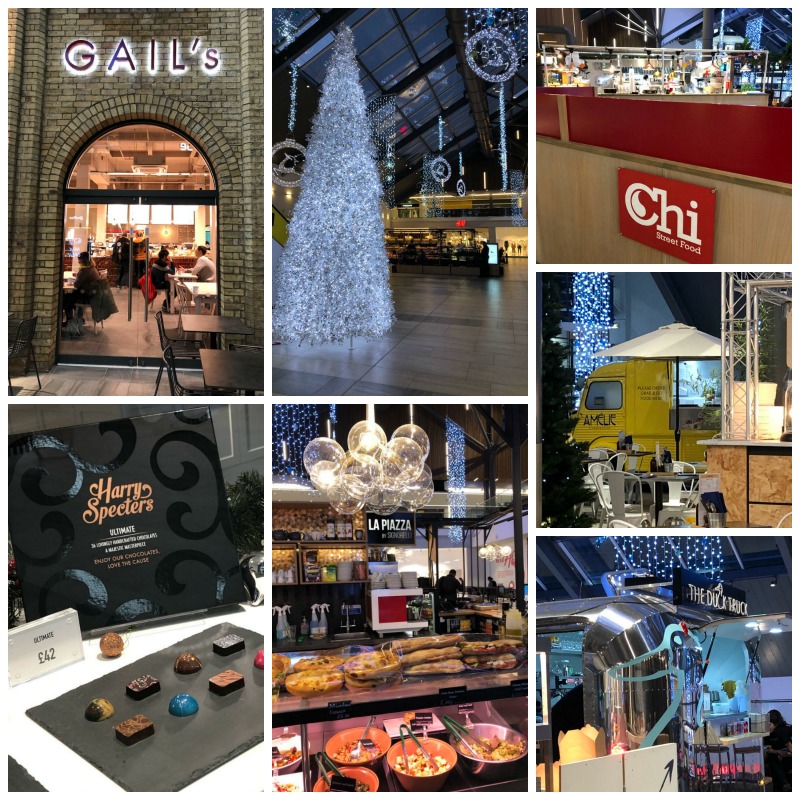 There is a new food experience in Cambridge – Food Social Grafton Centre. Shopping can be a tiring experience and food, and drink is always a good reason to perk you up. Looking for a great place to have a bite to eat in the city centre of towns can often be a highly disappointing experience. Attracted by big chain stores and high business rates, chain restaurants and coffee shops settle down here too. There is nothing worse than a tasteless lunch or a ‘fishbowl’ of coffee!

Amélie Flam-Kuche at the Food Court

The first food outlet to open on the first floor at the Food Court was Amélie Flam-Kuche offering delicious crispy stonebaked Flammkuchen and a variety of tasty and healthy side dishes. Amélie was a dream many years ago between Regis and Alex.

I have always been a big fan of their restaurants. Regis owned several restaurants in East Anglia for over 32 years. One of them was The Great House in picturesque Lavenham. Although we didn’t live far away, we always stayed over in one of the stunning rooms when we dined here. Their cheese board was out of this world! They sold the restaurants and started their new enterprise Amélie, which is the first one of hopefully many to come.

The second food outlet to open at Food Social Grafton Centre was Signorelli’s Deli. Alex began his first Italian Deli in Burleigh Street in December 2016 and decided it was the perfect timing to open another Italian restaurant just a stone’s throw away. La Piazza on the bottom floor at the far end includes a bar where they serve a good glass of Italian wine and cocktails. On the hearty side, you can get small plates, Italian sandwiches and snacks.

I was chuffed to hear that Harry Specters Chocolates was given the opportunity to open a shop and Cafe in the Grafton Centre as part of Food Social. Mona, the founder of Harry Specters, and I go a long way back. When I started the food tours in 2012, I soon came across Mona looking for a chocolatier to run my Chocolate Masterclasses. Mona and her team have developed their product at such a rapid pace, that I barely can keep up. This social enterprise all started off with her son Ash. His dream was to open a restaurant, and it had to be called ‘Harry Specters’. Instead of the restaurant, they decided to start a chocolate business dedicated to crafting the most delicious chocolates that create employment for young people with autism. They are involved in every aspect of the business. More on my blog about Chocolatiers in Cambridge.

Gail’s Bakery at the main entrance of the Grafton Centre

The rumour that Gail’s Bakery was going to open at Food Social Grafton Centre reached me pretty soon at the end of 2019. I was overjoyed as I love their Waste bread! The first time I came across, Gail’s Bakery was in London in March 2019. I straight away fell in love with their pastries and bread. Especially their Waste bread. They take yesterday’s unsold loaves and turn them into breadcrumbs, before making a porridge-like mixture with them. The breadcrumb porridge is then added to a fresh white sourdough dough, with the waste bread making up around a third of each new loaf. It’s then proved, shaped and baked, and at 750g, it’s larger than their other loaves. The result is a moist, tacky loaf with a scorched crust and malty flavour. I love it! More on my blog about Artisan bakeries.

This is just a taste of what Food Social Grafton Centre is offering. You can look forward to a variety of different cuisines from Asian to Turkish, a trader specialising in Duck and cheesecake. More food traders are set to open soon. Head over to Food Social when you are in the area or make it the reason to go here. I can assure you that you will not be disappointed!

Check out the Cambridge Travel Guide

This site uses Akismet to reduce spam. Learn how your comment data is processed.

Search
View all my blog posts