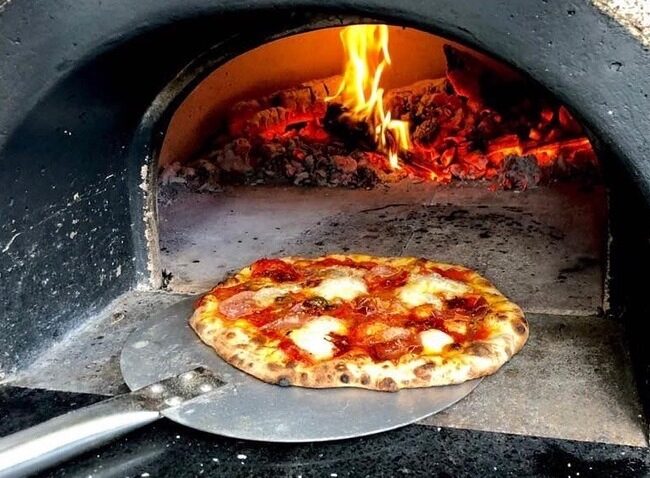 There is nothing better than homemade pizza! Especially a Neapolitan style pizza straight from the oven or, if you’re lucky to have one, a pizza or wood-fired oven. Some people like a pizza to be thin and crispy; others like me prefer a thicker base, which is the Neopolitan pizza from Naples. The thinner-based one is known as the Roma-style pizza, and indeed from Rome.

I like a well-made Roma pizza, but it is often disappointing due to the lack of toppings. This pizza dough only has to be made an hour beforehand, so it is perfect if you need to feed the crowds. In my opinion, there is no such thing as a quick dough. It is tasteless as it hasn’t had time to prove. The yeast or sourdough starter needs to do its work, which takes time. There is one exception, soda bread.

The history of the Neopolitan pizza

Did you know that bread originates from North Africa? To be precise from Mesopotamia, which started at Turkey and Lebanon, included parts of Iran, Iraq, Syria ending in Kuwait. This flatbread was called Naan. Over the years this bread spread to Asia and Sicily, Sardinia and Greece. It became popular in Italy too, and the locals gave it their twist by adding delicious toppings. The focaccia was mostly popular north of Rome, in Southern Italy the galette style bread, known as poor people food was popular street food. Initially, they used oil on this bread, but tomatoes became popular after the introduction by the Europeans.

Why is Neapolitan pizza so special?

Neapolitan pizza is not just a thick pizza base. It is rather special! You only are allowed to use this name if you use fresh yeast, highly refined Italian 0 or 00 wheat flour, salt and water. It has to be kneaded by hand or at a slow setting on your mixer. Using a rolling pin is out of the question!

It even has its own official certification. In 1984 the Associazione Verace Pizza Napoletana (VPN) was founded in Naples. Their goal is to certify pizzerias that use the proper artisan traditions of authentic Neapolitan pizza.

The second requirement is a specific cheese! The highly regarded Fior di latte is required to be one of the toppings of the Neapolitan pizza. This lovely soft Mozarella is originally from the Amalfi coast. The reason why this cheese is so special is that they use the milk of the cows, which graze in the mountains. It is acclaimed to be much tastier than regular buffalo mozzarella and has more protein, higher water content and fewer calories.

The flower cheese from Naples

However, in Naples, they use the ‘flower’ cheese from a small village near Naples, which is extremely difficult to get hold of elsewhere in the world. The only problem is that due to the high water content, the Mozzarella can slide off the pizza. Hence, the dryer Mozzarella is the preferred one for Italian restaurants with a high turnover as it is much easier to handle.

The recipe for my pizza dough is a Neapolitan-style pizza as I don’t use fresh yeast but dry yeast, and most of my preferred toppings don’t include Mozarella. If you once have had Fior di latte, you don’t want anything else. Delicious to use in salads or on a bruschetta. A good deli should stock this Mozarella.

A good pizza starts with a good base, but the toppings are equally as important. Please don’t skimp on them. It’s the finishing touch! Make the passata yourself. It only takes 10 minutes. The rule for the other toppings is, don’t overload, as the pizza will become soggy.

I have experimented with various toppings over the years. The traditional ones are always popular, but much to my surprise, the star of the show at the moment is a pizza topped with Labneh, fennel sausage and spring onions. Even a winner with the carnivores! Pizza feasts at our house always include the spicy Italian Nduja, pronounced as ‘andouille’. The French and Spanish claim the recipe for this sausage came from their country. I only like to add that the Spanish love spicy food. Pizza with Labneh, fennel sausage and spring onions

I like passata with a kick. This passata is easy to make. Don’t worry if you have leftovers as it freezes well and is great as a pasta sauce. Below I am sharing some of our favourite pizzas. Head over to the recipe.

Wondering where I get my pizza fix if I don’t have time to make them myself? Here are my favourite pizza haunts in Cambridge.