The kitchen gadget I didn’t want

You landed on the right page! Indeed, this is the kitchen gadget I didn’t want. I could not see why you would need a Thermomix if you had a good stove, pots and pans, a stand mixer, juicer, a Big Green Egg and a woodfired oven. What would a Thermomix add to my life?

When top chefs rate a tool as the kitchen gadget they cannot live without, then you know it is a fantastic piece of kit! The Thermomix is not only a time-saver but creates perfect sauces, chops, cooks rice and pasta, makes yoghurt and weighs.

The Thermomix TM6 is the latest model, and one of the biggest perks is that you will get a vast range of free online recipes as they are part of the Thermomix. You will be notified of regular updates. Even if you are not a great chef, the Thermomix will turn you into a cooking wizard. The recipes are easy to follow, and the Thermomix gives clear instructions.

If you are a more experienced chef, then you don’t have to follow the recipes, or you can adapt them as I do.

p.s. views are my own and not sponsored

What I love about the Thermomix 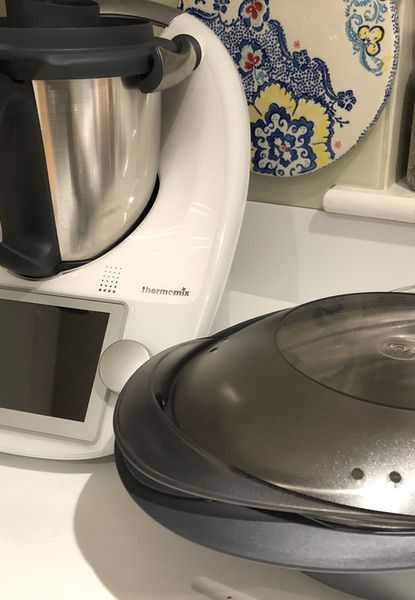 How to be convinced

The first time I came across a Thermomix was 6 years ago, and I wondered why you would want a machine, which makes all your meals! A year later, one of my guests on my food tour, a chef, mentioned that Thermomix was the kitchen gadget all chefs were having these days. Popular as it is so versatile and easy to dismantle.

Thermomix kept popping up in my life. Mainly on TV as I am a big fan of Masterchef Australia. On the UK shows they were less prominent until recently. Last year my husband bought me a Vitamix for Christmas to replace the Nutribullit. I barely had unpacked it when my husband mentioned that the present he really wanted to get me was a Thermomix, but he had to book a demo to get it. Not much of a surprise present, he thought.

This was in February, and I told him that I didn’t need an expensive Thermomix. The discussion continued until October this year ( 2019). The only way to shut him up and to keep nagging me was to agree on a demo. I have to confirm, that I was completely taken back. After the demo, I was convinced the kitchen gadget I never wanted to have was entering my kitchen domain.

Probably just like me, you might be wondering why you need a Thermomix demo. It is not a sales trick, but it is important you understand how this great kitchen gadget works. It is a big investment and you want to get the best out of it.

If you want to surprise somebody with a Thermomix, then you can buy one via a rep and book the demo at the same time. You will need to get in touch with Thermomix rep first.

Keen to get a Thermomix? Do you have any questions? Get in touch as I am happy to help. I don’t demo’s myself, but I can connect you with an excellent Thermomix rep.

Foodie Gerla
Are you an Indie, or do you love supporting Indie

Let's brighten up this wet, dull, grey day with a

Easy to fall in love….Hailing from Friesland,

Streets of London on a rainy day…#londonlife #