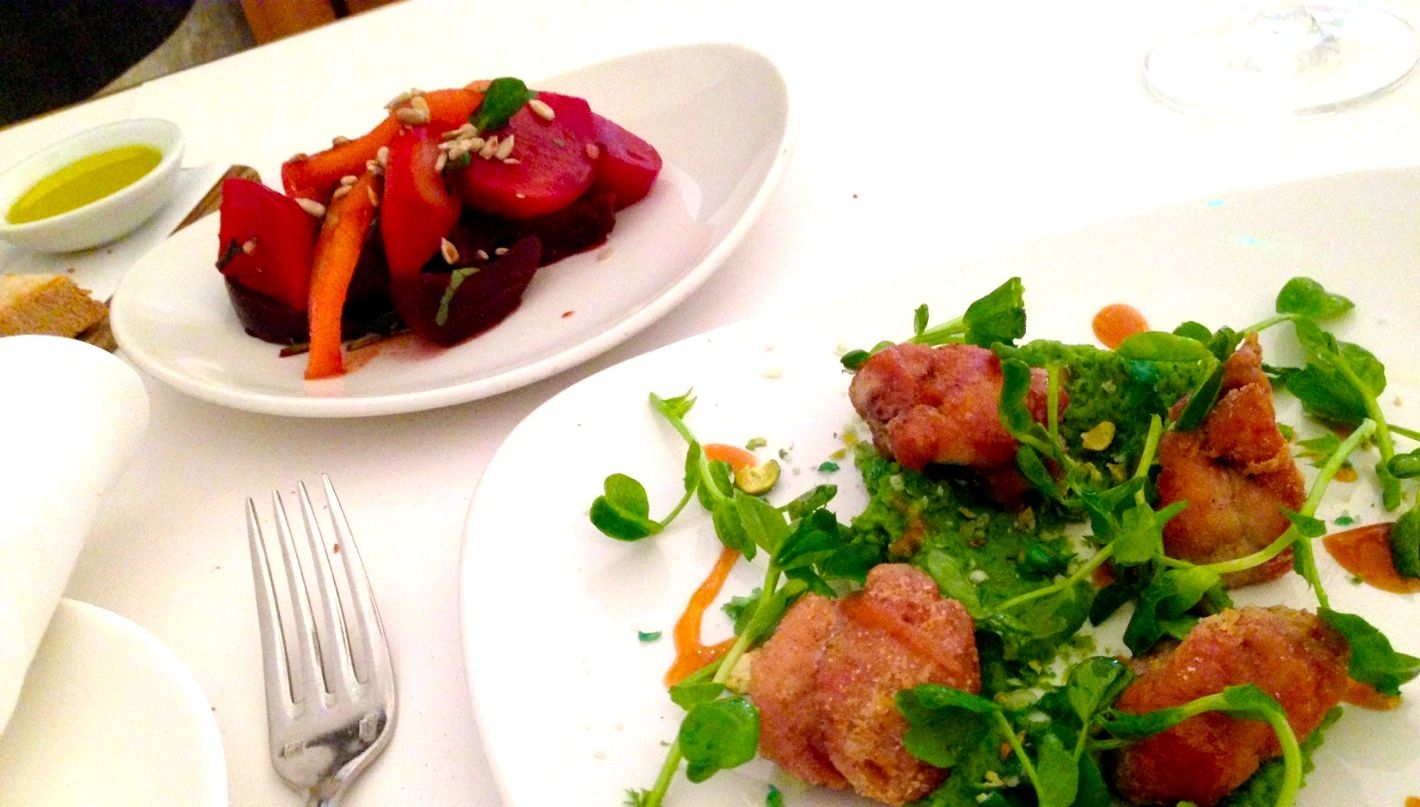 Eating my way through Ottolenghi

Poor chap! Of course, I haven’t turned into a cannibal, but I had to visit London over the last month 3 times, so I decided that this was a great excuse to indulge into the food of one of my favourite chefs, Ottolenghi. His recipes are easy to prepare and full of flavour. What I especially like about his meat recipes is the marinating. This doesn’t only enhance the flavour of the meat, but it is almost like ‘lazy entertainers’ food. You pop everything in a dish, leave it for a day or less if you thought of it later and pop it into the oven when your guests are sipping their apéritifs. His salads are another thing to die for. I haven’t tried many of his desserts yet as I don’t have a big sweet tooth. However, my visits to his restaurants have changed this!

Did you know that you know that a holiday is going to be a good one when you spot one of your favourite chefs lining up next to you at the airport for his breakfast? I couldn’t believe my eyes when I spotted Ottolenghi in the queue when I was about to fly to Turkey in July 2013. I was thrilled with excitement and hoped that he would board the same plane as me. At the time he was filming his Turkey programme, so I thought he was heading that way. Unfortunately, he wasn’t. Many people asked me ‘I’m sure you must have approached him’. I actually didn’t as I wanted to leave him in peace having his breakfast. My late father was a well-know horseman in the Netherlands, and I didn’t like it when people kept bothering us. 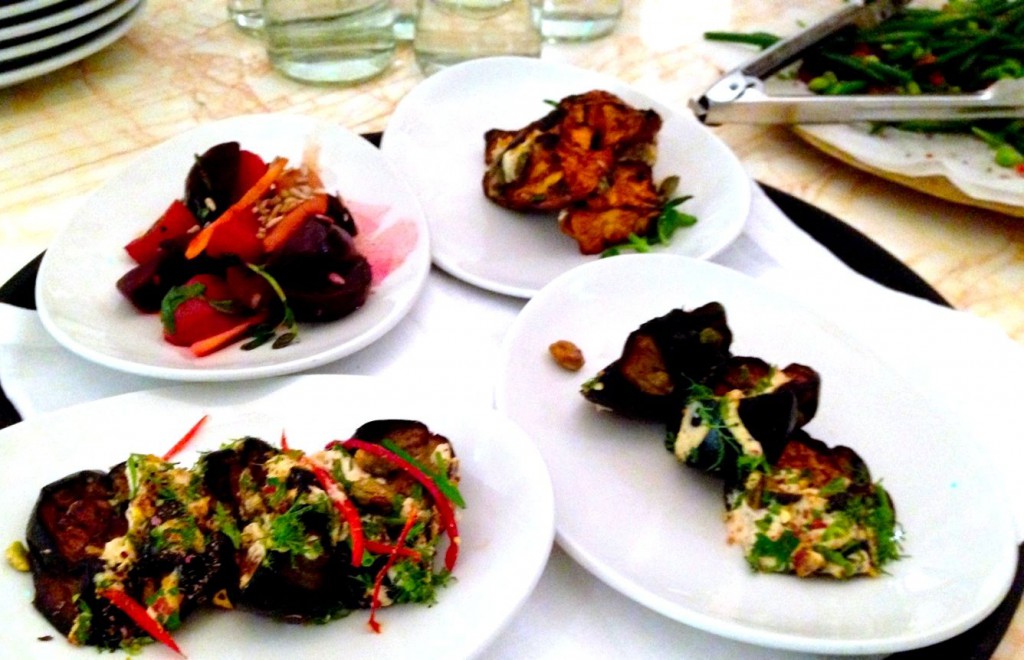 Food waiting to be served at Nopi

I often wonder why I never had been to Ottolenghi’s restaurants, especially as I do like Soho. I know you are going to raise your eyebrows now, but to be honest, I was a bit lazy and didn’t visit his website so unaware that his restaurants don’t carry his name. No wonder I didn’t spot his restaurants on my many visits to the capital. Having been deprived of his food over the last few years, I now had an aim this month; the full monty! 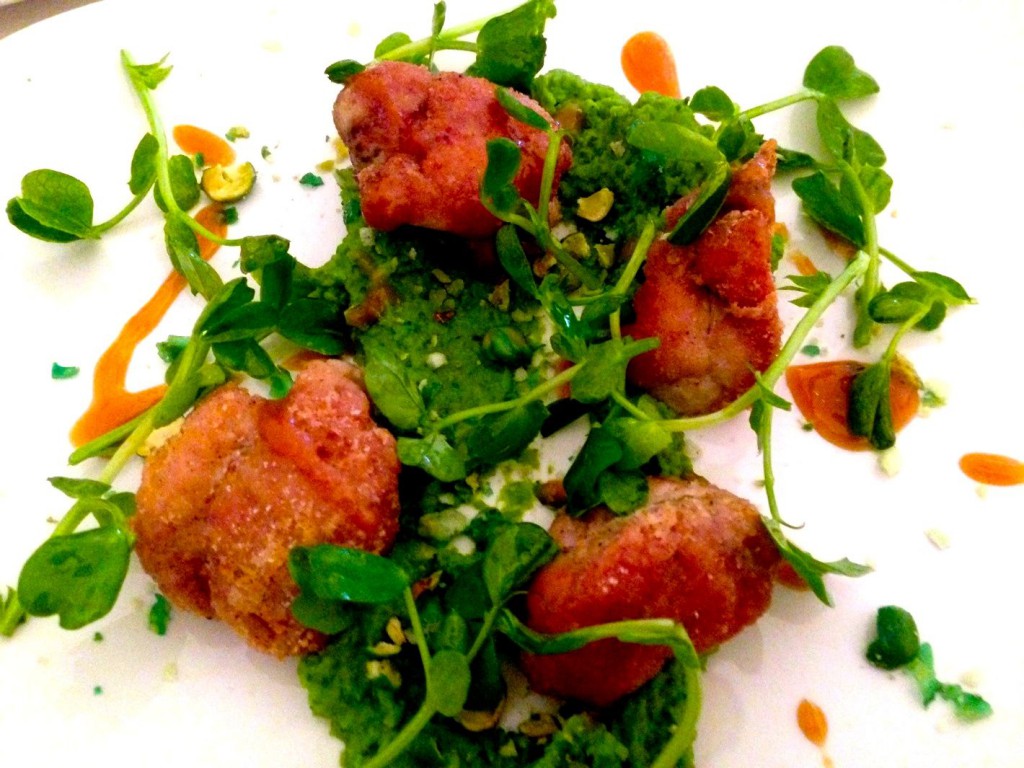 Nopi was the first one on my list. Very convenient just off Regent Street. I love the design, especially the lights and the serviette rings. On a closer look, I decided they couldn’t be anything else than curtain rings. How clever! According to the waiter, they are from China. Great idea and I will ‘borrow’ the idea to show off at home.

I was here for lunch, and I decided on something, which I don’t often spot on menu’s; sweetbreads. I love them, but challenging to get hold of. So it was a salad of purple and candy beetroot, quince and sunflower seeds followed by lamb sweetbreads with wasabi peas and I have to say, heaven doesn’t come closer for me. It was delicious. Not a huge portion, but enough for me. Perfect if you are on a Dukan diet too. I did have a small nibble of the sourdough bread and more of it to soak up those lovely juices of the beetroot salad. That definitely shouldn’t be left! Then dessert. There are some exciting choices on there. The crumble did appeal, but as soon I was told that it was like an Eaton mess, I decided against it. There aren’t a lot of things I’m not fond of, but Eaton mess is for me a real mess. Not being rude, though, it’s not my kind of food. So it was definitely the blackberry and liquorice sorbet. The biggest problem was, there wasn’t enough of it. I could have had a bucket!

It was lunchtime, so I couldn’t justify dipping into the digestive menu. I’m still amazed that I was so strong with so many drinks on there, which I really like. I have to come back and have the Grappa then. The hazelnut liquor is an interesting one too. I made Tiramisu with it the other day, and it’s so much more beautiful and refined than with Amaretto.

When I made my way downstairs, I was in for a pleasant surprise. Ottolenghi definitely likes to keep the eye occupied, and he gives you food for the mind too with moving images in the staircase and fascinating toilet doors. I am not sure what would happen if you have had a few glasses of wine. You might struggle to find the entrance of the toilet. I am not giving it away; I am afraid. You have to check them out yourself!

Downstairs you can find two big tables where you can dine and sit amongst the foodie stock of the restaurant. I wasn’t sure if they were products the kitchen was using or things to buy. So I was happily browsing when I all of a sudden spotted one of the chefs working on the table. This Australian chef had been in London for 6 years on and off. He was now planning to cross the big pond but was still waiting for his visa. More fascinating was his ‘life outside Ottolenghi’. As he put it; during the day he was cooking in a restaurant, and by night he was clubbing together with local and visiting international chefs creating fantastic food at their pop up’s. By the sound of it, I have to join the Chateau Mormot Supper Club soon.